• Some Low Fell landlords face bills of between £11,000 to £14,000 as Michael Gove, the Housing Minister, declared an attack on poor quality private rental homes.

• Also, the White Paper wants every landlord in Low Fell (1,234 of you) to go on a Landlord Register and proposes the removal of Section 21 no-fault evictions. This could make it more difficult for you to get possession of your Low Fell rental property.

• Are these proposed changes another nail in the buy-to-let coffin for Low Fell landlords?

On the face of it, yes, it could be seen as another attack on the humble Low Fell landlord, having to spend money on their properties and get tangled up with red tape on a register and then having no-fault evictions removed.

This ‘Levelling Up Bill’ is a White Paper. White Papers are policy documents created by the existing Government that set out their future proposals for legislation. Many White Papers don’t even make it to the House of Commons to be debated on, and even then, it needs to be voted on by both Houses of Parliament before becoming law. Any changes are at least two or three years away, and that’s assuming that it gets debated and subsequently approved.

Many have said the White Paper is supposed to lay out how to sort the challenge of rebalancing the UK economy that is suffering from the highest level of regional inequality than any G8 country. This is a gargantuan challenge …

Yet the Levelling Up White Paper reads very much like a shopping list of great ideas without the means to pay for it.

One of the 12 points in the White Paper was focusing on housing, with a plan to introduce a new minimum standard for rental properties, a landlord register and the removal of no-fault evictions (as an aside, there was also a mention of a possible reintroduction of Home Information Packs - remember those from 2009!).

So, what does this mean for the landlords of the 1,234

The proposed changes will mean rental homes in the private sector will have to meet two specific standards that the existing 4,993 social housing homes in Low Fell currently need to meet.

The first being called the ‘Decent Homes Standard’ (DHS) and the second, the Housing, Health and Safety Rating System (HHSRS) evaluation.

Looking at data from the Government, there are 288 private rental properties in Low Fell that are considered substandard under these two measures and each one would cost between £11,000 and £14,000 to bring up to the prescribed standard. That means ...

The estimated total cost to improve the 288 Low Fell properties, that are considered substandard, could be as high as £4,025,308.

All of that would have to come out of the pockets of Low Fell landlords!

Yet both systems of standards (DHS & HHSRS) have been slated by many (even by the Government itself).

The DHS criteria for the standard are as follows:

1. It must meet the current statutory minimum standard for housing

2. It must be in a reasonable state of repair

3. It must have reasonably modern facilities and services

4. It must provide a reasonable degree of thermal comfort

Note how the word ‘reasonable’ is used in three of the four points of the DHS. Reasonable is an arbitrary and a very much subjective point of view. It screams loopholes and get out clauses to me.

Looking at the HHSRS, the Government announced just before the pandemic in June 2019 that the HHSRS would be revamped after it was found to be ‘complicated and inefficient to use’.

Putting aside how one measures the standards, it is a simple fact that there are many Low Fell rental properties that are substandard. I believe it right the Government have an ambition to halve the number of sub-standard private rentals by 2030. However, would it surprise you that …

In 2006, 46.7% of private rented homes in the UK were classed as substandard and today that has reduced, without any legislation, to 23.3%. One must ask if new legislation is now required? 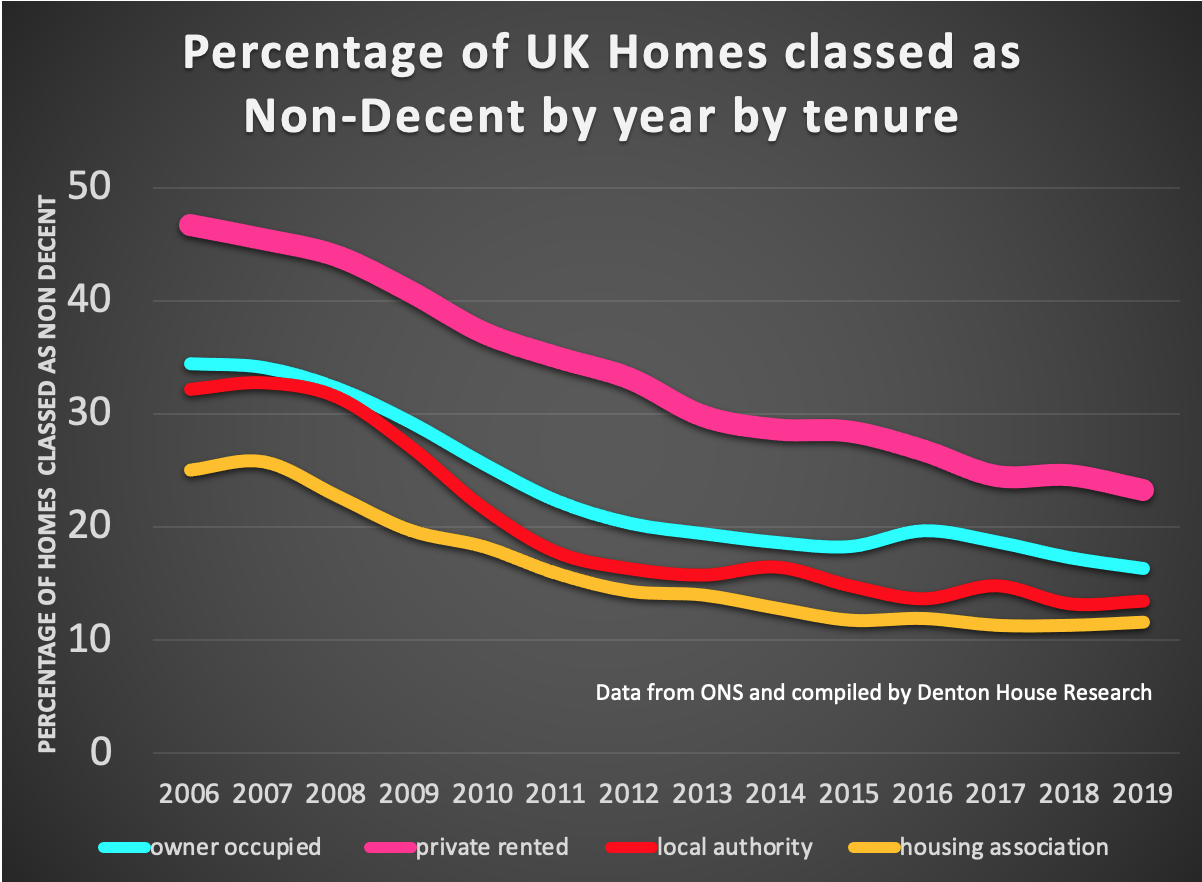 Also, if you recall in an article I wrote recently (drop me line if you would like me to send it to you), Low Fell landlords will be faced with bringing their properties up to an energy rating (EPC) of C between 2026 and 2028 in legislation already announced.

Most of the works to meet that EPC rating requirement will be the same works to meet this new DHS and HHSRS. Also, in that article, I discussed how the Government have suggested that certain allowances will be made for landlords on rental properties that can’t be improved.

So, I think Low Fell landlords should sit tight and let the Government shine more light on this in the coming months before any knee jerk reactions are made.

To be honest, there are several city/borough registers around the UK for landlords. Experience has shown they seem to add an extra level of bureaucracy and red tape. The register would be for every Low Fell buy-to-let landlord and rogue landlords would be struck off whilst allowing tenants new redress rights. Another reason to employ the services of a letting agent to sort!

Again, I spoke about this a few weeks ago with the proposed removal of Section 21 to evict a tenant (again, if you want a copy, drop me a line). If you recall, I stated that no-fault evictions were removed in Scotland over four years ago and the apocalyptic suggestions it would kill the rental market for Scottish landlords was not forthcoming. Now of course, the Scots strengthened the other grounds to evict a tenant. If the Government strengthen the Section 8 legislation, again, I cannot see this being an issue south of the border. Again, time will tell once the Government put more meat on the bones of the White Paper.

Many of the announcements made in the Levelling Up White Paper are re-hashed proposed legislation that has been on the books for the last couple of years.

This White Paper is not another nail in the coffin of

Yet, many commentators have cautioned that more landlords with substandard homes will sell up because of these proposed changes, warning the sell up would add to the private rental sector's shortage of homes, thus pushing up rents.

If that was true, that would increase rental returns on Low Fell buy-to-let and attract more Low Fell landlords into the sector, wouldn’t it?

But if you don’t agree other Low Fell landlords will buy these rental properties that other landlords are selling, who will buy their Low Fell properties from them? It will be Low Fell renters, who are now able to buy because the price has come down, meaning equilibrium should return to the market.

This is all theoretical and there are shortages/gluts in specific locations. Let us not forget it was 12/18 months ago that rents were dropped by double digit percentage points in the space of a couple of months in the big cities. Those rent drops weren’t anything to do with landlords buying up City Centre rental properties, but demand plummeted with 20 something tenants moving back in with their parents during the first lockdown and the months that followed. Yet, now rents have bounced back to pre-pandemic levels (and more) with the return of tenants to the cities.

In a nutshell, if Low Fell landlords do end up selling in their droves (which they won’t), yet if they do, those Low Fell properties will still exist.

What goes around, comes around. So, let’s see what happens in the coming months. In the meantime, if you’re a Low Fell landlord and you want to discuss anything in this article, please either drop me a line on 0191 487 8855 or send me an email to sales@sarahmains.com