An additional 5,469 spare bedrooms have been locked out of the Gateshead housing market since 2011 as Britain’s ageing population means the country’s stock of homes is being used more unproductively.

The number of spare bedrooms in Gateshead between

The number of Gateshead households living in properties with at least two spare bedrooms (i.e. spare 'spare' bedrooms) increased by 2,569, from 25,218 households to 27,787 households between those ten years.

That means 31.2% of Gateshead households

have two or more spare bedrooms.

And this isn't just a local issue; Britain has 8,902,471 properties with a spare ‘spare’ bedroom (i.e. they have two or more spare bedrooms). 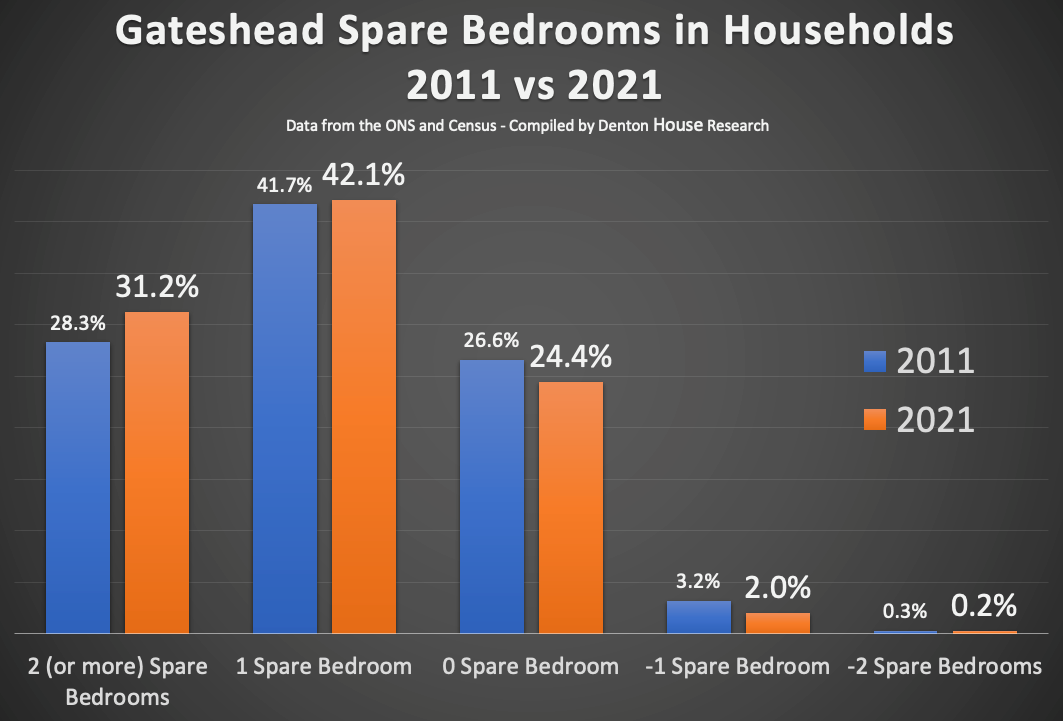 Before I dive deep into the issue of these 'spare' spare bedrooms, let me look at the 'occupancy rating' of all households in the country.

The ‘Bedroom Standard’ allocates a separate bedroom to each of these groups (according the Office of National Statistics):

• any remaining adult (aged 21 years or over)

• two children (aged 9 years or under) regardless of sex

• any remaining child (aged 9 years or under)

So, with this serious overcrowding, why is this under-occupation happening and is there a better use for these homes?

Britain has an ageing population. Just over 1 in 5 (18.6%) of Britain’s population are aged 65 years or older,

In the last ten years, many of Britain’s baby boomer generation (currently aged 59 years to 77 years of age) have entered retirement. Most of these extra bedrooms are in homes owned by these baby boomers, who are probably still living in the original family homes they bought in the 1980s or 1990s to raise their children, yet still live there years after their children left home.

And it will get worse throughout the 2020s as the number of Brits living in homes greater than their needs will grow further as the demographics of the British population shift.

There are 68,247,855 bedrooms in England & Wales, and even if nobody shared a room, there would be enough for every one of the 59,597,542 of us to have a bedroom and still have 8,650,313 spare bedrooms! They are very unequally distributed between households.

Some on the left suggest we forcibly make these older mature Whickham homeowners people move to smaller homes. Yet, it's their property; they paid the mortgage on it for years (especially when mortgage interest rates were 15% and above), and thus, it's their choice if they want to move or not.

Some of the difficulties are that downsizing in Whickham often needs to make financial sense for mature homeowners.

Most mature Whickham homeowners live in average-priced homes and suitable bungalows, even though they are smaller, often cost as much, if not more, than their large family home.

This issue will slowly worsen in the coming twenty years, so what are the options?

There is a necessity to motivate builders to build suitable properties for these mature homeowners to move into and to change the dynamics of the available properties to buy. For example, there are only 2 million bungalows in the UK, and we only built just over 1,800 new bungalows in 2020, yet seven in ten UK people (c. 10.7 million) aged over 65 want to live in a bungalow.

Secondly, there needs to be reform of the taxation rules on housing. Taxation works on the carrot or stick method.

However, the cost-of-living crisis and heightened energy bills could be doing the Government's job for them.

The number of larger Whickham homes owned by mature homeowners, often for 25 years plus, has been snowballing in the last six months.

This is good news for younger families that can afford to jump from their smaller homes, yet many can't afford to make the jump for the same reasons why mature homeowners are moving home.

This means those homeowners in the middle to upper levels of the Whickham property market need to be very realistic with this pricing as the supply of the mid/high range properties is outstripping the demand.

Whilst it is not a good distribution of housing if you have some people in overcrowded households and others with spare bedrooms, everyone should be able to choose how to live.

Many Whickham homeowners delay downsizing because they prefer to grow old in their family home rather than downsize. However, I often see mature homeowners downsizing too late when say, they have had a fall, are unable to manage the basics of gardening or cleaning, or the home becomes a physical hazard.

This downsizing phase will continue to grow, peaking in the mid-2030s.

The issue is, I cannot see builders or the Government building hundreds of thousands of bungalows in the next decade.

So maybe, you should consider making a move in the next few years, when you will have a better choice of bungalows to move to and you are able to put your stamp on it when you are in your 70’s and before you are unable to in your mid/late 80s?

If mature homeowners have large properties earned from working hard and paying taxes, then quite frankly, that is nobody else’s business and no one should force you out!! You might want that extra space for children and grandchildren to come and stay or as office space, a television room or a hobby room. Yet please, I must stress these are only suggestions.

These are my thoughts; what are yours?